The term “winter” is not a noun in Naples, it’s a verb – as in the sentence:

So when they visit during our winter dry season, they have certain expectations about sun and clear blue sky – and, most of all, no excuses! 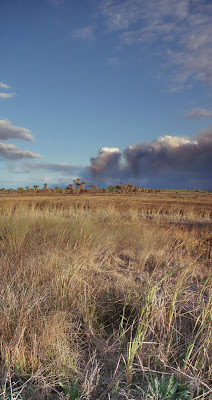 Sometimes the skies aren’t so accommodating.

Case in point was our recent spell of fog … or was that smoke from a fire?

The truth is in south Florida … sometimes it’s both.

The smoke is mostly from prescribed burning in the Big Cypress and Everglades. Moisture conditions have been just right for controlled burns.

And meteorologic conditions have been just right for fog, caused by a stationary front up near Lake O that’s been siphoning tropical moisture from the south and a temperature inversion that’s keeping cold air at the surface.

That’s formed a fog bank off the coast that rolls onshore during the evening.


Saturday afternoon it was brilliant blue sky at our house, and hot. We hopped into the car for the 5 minute drive to the beach.

Halfway there ran into the fog bank.

Talk about a micro climate!

The air turned cold and damp, and since a sunset was now out of the question, we turned back – Plan B it would be: Sudgen Park.
But even there we had to dig deep into the trunk to find every spare article of clothes we had.


The next day we made it to the beach and got our blue sky.

But out on the water, in the distance, sneaking in from the horizon – the fog bank was back on the prowl. 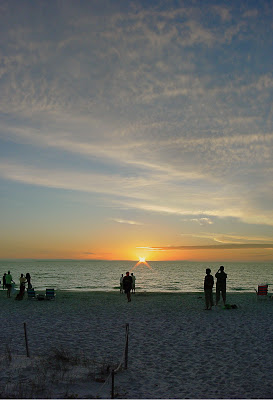 Or was that smoke?

Sometimes in south Florida we get both.

Click here to tune into more "That's My World" posts from all over the world.
By Unknown at Sunday, February 15, 2009

Email ThisBlogThis!Share to TwitterShare to FacebookShare to Pinterest
Labels: It's Not the Heat

smoke or fog, looking at your pictures, it all looks beautiful to me. I love your beach!

Lovely pics, as always. I wouldn't mind a bit of fog. The sand on the vertical beach photo looks tempting.

Such an interesting post and whatever the weather conditions in Florida, your excellent photos show how beautiful it is. Thank you :)

Beautiful pictures Robert. Makes me homesick but not for the "Both". Have been in "both" conditions and you can't see the end of your hood. Scary.

Oh I would love to 'winter' in south Florida. When I lived in Venice, the best month of the entire year was MARCH. I do remember those foggy/smoky days!!! BUT--I also remember going to the beach in March on a clear, beautiful day and having breakfast on the beach. Amazing...
Betsy

Lovely clouds over the grasses, pretty white beach, and great sunset. I know it can be cold down there in the humidity, but from my view in a Utah winter, it's not so bad!
I can see the draw for "wintering" down there.

I would love to be there. These are wonderful photos.

Lovely photos and nice information about your part of the world.

Thanks for your comments.

This has been the first day without fog, after a few days of it in a row. But at the beach their was still some cool maritime air blowing off the gulf, and this time with some sizable chop and plenty of wind. The air surfers were out in force.

This is by far one of my favourite posts. Great description, letters and images.

Awesome photos. The last one deserve a prize.

Very beautiful photos, Robert! That last one is a stunner. I wish you a great week.

This Is My Blog - fishing guy said...

Rob: You certainly have beautiful skies as we go into another section of sunless skies.
I'm glad you liked our full rivers. We surely have no water shortage around with the Great Lakes and snow.

It's wonderful to see your landscape. So different from mine here in rural Massachusetts, but every bit as lovely.